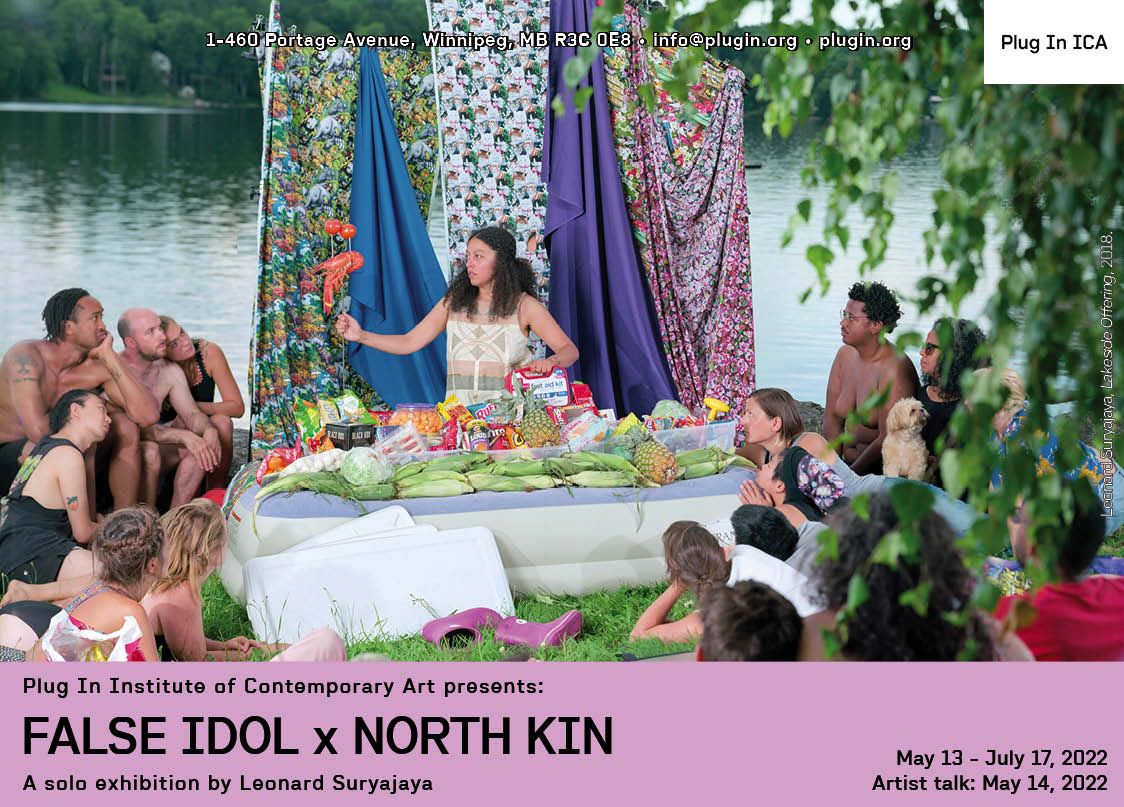 Plug In ICA is very thrilled to be presenting the work of Chicago-based artist, Leonard Suryajaya in Winnipeg. This is the first time the artist is formally exhibiting work in the country.

Suryajaya was born and spent his formative years in Indonesia to Chinese parents. He is a second-generation child of immigrants who, like his parents, carry backgrounds that are deeply inflicted by conflict, displacement, assimilation, the attendant trauma, and to a great extent self-erasure as part of their process of survival. Within the predominantly conservative Islamic Indonesia the artist grew up in,  he discovered his own queerness and subsequently had to suppress it from anyone including himself. Suryajaya’s photographic practice began and developed after relocating to the United States after stints in theatre programs. Over the course of discovering the medium and shaping his artistic voice through it, his work became an instrument by which he cultivated and nurtured a self away from personal histories of trauma, a self surrounded by newfound family outside a biological one, and a self that felt weightless within the fantastical environments he designed for his photographs. One of his formidable series, False Idol, surveys a long trajectory of Suryajaya evolving over years, as a person and artist moving through the various complex circumstances he began and continues to traverse. The series has served as a respite for creativity for the artist and as a container to sustain opposing perspectives, identities and states of mind. Aspects of False Idol will be assembled for this exhibition. It is a series that upon viewing charms with its elaborately detailed selection of patterns, textures, objects and rushes of colour competing for your sight. It is indicative of the grand enveloping splendour Suryajaya’s photo environments have become known for. A number of the pieces in this exhibition feature a mix of friends and loved ones including his biological family and the family he has made along the way. The artist has been lucky to participate in several artist residency programs which have connected him to various communities all over. This past winter Suryajaya, continued to build upon the relationships he’s made through his work by offering free studio portrait sessions to members of the public when he visited Winnipeg for the first time. The result of this portrait session has been amalgamated into an interwoven collage that becomes part of his characteristic visually rich installation. The installation models after airport newsstands and gift shops for travelers on their way to or leaving home. The sculptural elements of the exhibition extend the immersive set designs of his photographs to make that even more vivid. Suryajaya sees these gift stands as an invitation to audiences to ‘find a sense of familiarity in the photographs of the ‘other’, the foreigners.’ The exhibition also features his video work, Lesser Than Three, a playful, surreal, theatrical work that features as its main protagonist,  Suryajaya’s long-time partner, Peter.

Suryajaya’s work has circulated across the United States and overseas in various exhibitions and publications. He continues to create uncompromisingly maximalist images and installations that never feel overkill or boring and it is our very pleasure to have him in here for our local audiences.