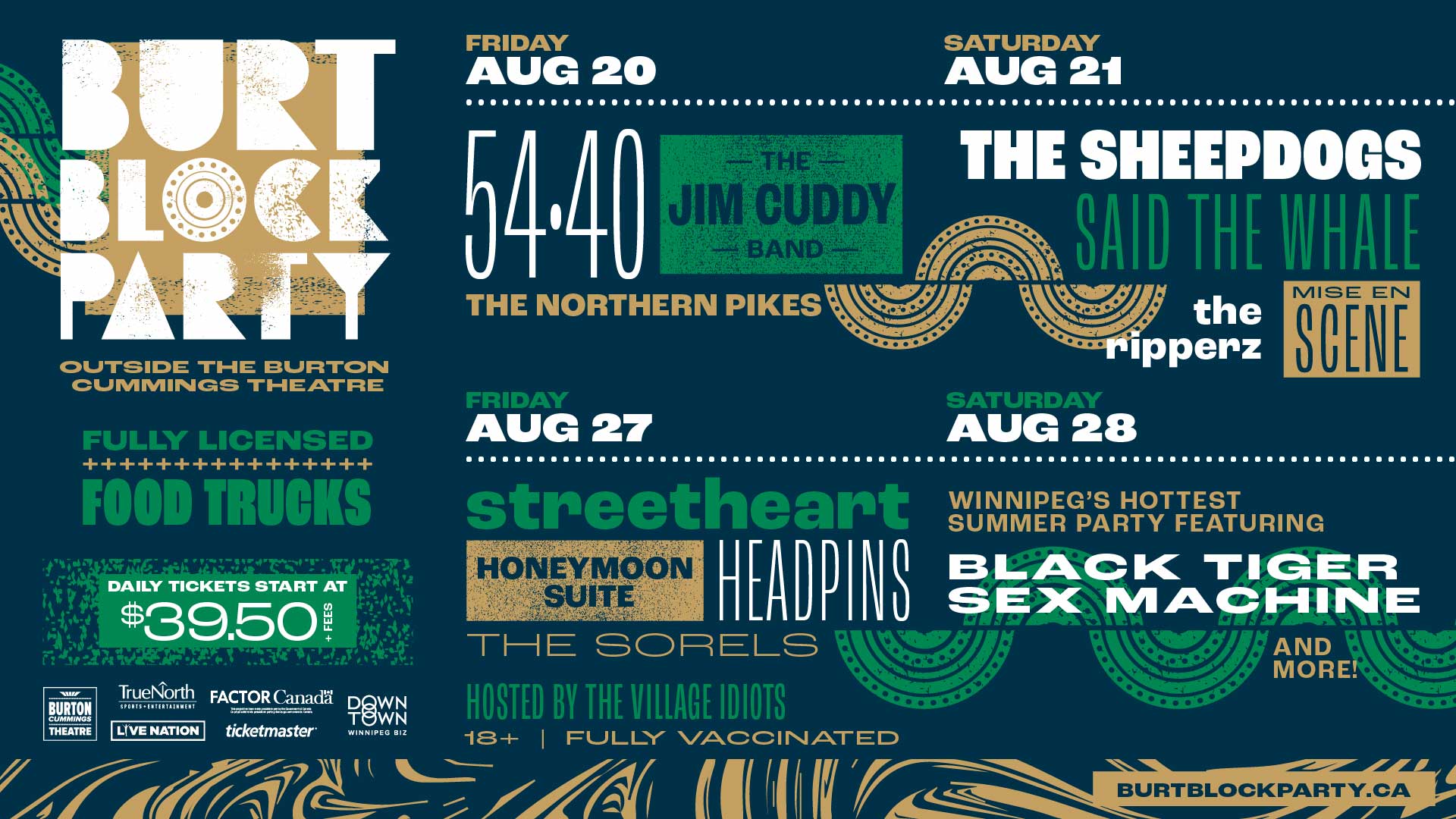 Manitoba music fans will have the opportunity to once again gather outdoors in a festival atmosphere this August in downtown Winnipeg with the Burt Block Party Concert Series.

The Burt Block Parties, produced in partnership with the world’s largest concert promoter, Live Nation Canada, will be hosted over four nights on two weekends in August and feature a loaded lineup of star-studded Canadian talent. The concerts on Aug. 20, 21, 27, and 28 will take place directly outside the Burton Cummings Theatre between Smith Street and Notre Dame Avenue, welcoming up to 4,000 fans each night. Guests are encouraged to bring their own lawn chairs for the concerts and can look forward to a fully licensed site plus several food trucks.

The Aug. 20 lineup will be headlined by eight-time Juno nominee alt-rockers 54.40, with Canadian Music Hall of Famer Jim Cuddy Band and double-platinum artists The Northern Pikes rounding out the night.

The following weekend, fans will get their fill of classic rock on Aug. 27 from three of Canada’s most iconic rock bands – local favourites Streetheart headline the evening with Honeymoon Suite and the Headpins. The Sorels were recently added to the lineup.

The Block Parties will wrap up with Winnipeg’s Hottest Summer Party to pump up the downtown streets on Aug. 28. Headlining the night are Canadian trio, Black Tiger Sex Machine with other acts to be added.

Each Burt Block Party will be hosted by local music lovers The Village Idiots, creators of the hit series Live at The Roslyn.

As per provincial health restrictions, this event is open to all fully vaccinated Manitobans over the age of 18 who can show proof of vaccination at the gate.

This project has been made possible in part by the Government of Canada. Ce projet a été rendu possible en partie grâce au gouvernement du Canada.

Entry subject to any COVID-19-related rules and restrictions in place at the time of the event, including but not limited to, proof of fully vaccinated status being required for entry.

We look forward to welcoming you back to the Burton Cummings Theatre! Don’t hesitate to reach out to us for information at info@tnse.com